We’re releasing a first beta of Firctionless Framework (v5)!
Since the initial Frictionless Framework release we’d been collecting feedback and analyzing both high-level users’ needs and bug reports to identify shortcomings and areas that can be improved in the next version for the framework. Once that process had been done we started working on a new v5 with a goal to make the framework more bullet-proof, easy to maintain and simplify user interface. Today, this version is almost stable and ready to be published. Let’s go through the main improvements we have made:

This year we started working on the Frictionless Application, at the same time, we were thinking about next steps for the Frictionless Standards (opens new window). For both we need well-defined and an easy-to-understand metadata model. Partially it’s already published as standards like Table Schema and partially it’s going to be published as standards like File Dialect and possibly validation/transform metadata.

In v4 of the framework we had Control/Dialect/Layout concepts to describe resource details related to different formats and schemes, as well as tabular details like header rows. In v5 it’s merged into the only one concept called Dialect which is going to be standardised as a File Dialect spec. Here is an example:

For performance and codebase maintainability reasons some marginal Layout features have been removed completely such as skip/pick/limit/offsetFields/etc. It’s possible to achieve the same results using the Pipeline concept as a part of the transformation workflow.

Checklist is a new concept introduced in v5. It’s basically a collection of validation steps and a few other settings to make “validation rules” sharable. For example:

Having and sharing this checklist it’s possible to tune data quality requirements for some data file or set of data files. This concept will provide an ability for creating data quality “libraries” within projects or domains. We can use a checklist for validation:

In v4 Pipeline was a complex concept similar to validation Inquiry. We reworked it for v5 to be a lightweight set of validation steps that can be applied to a data resource or a data package. For example:

Similar to the Checklist concept, Pipeline is a reusable (data-abstract) object that can be saved to a descriptor and used in some complex data workflow:

There are no changes in the Resource related to the standards although currently by default instead of profile the type property will be used to mark a resource as a table. It can be changed using the --standards v1 flag.

It’s now possible to set Checklist and Pipeline as a Resource property similar to Dialect and Schema:

In this case the validation/transformation will use it by default providing an ability to ship validation rules and transformation pipelines within resources and packages. This is an important development for data publishers who want to define what they consider to be valid for their datasets as well as sharing raw data with a cleaning pipeline steps:

There are minor changes in the stats property. Now it uses named keys to simplify hash distinction (md5/sha256 are calculated by default and it’s not possible to change for performance reasons as it was in v4):

There are no changes in the Package related to the standards although it’s now possible to use resource dereference:

Catalog is a new concept that is a collection of data packages that can be written inline or using dereference:

There are few changes in the Inquiry concept which is known for using in the Frictionless Repository (opens new window) project:

The Report concept has been significantly simplified by removing the resource property from reportTask. It’s been replaced by name/type/place/labels properties. Also report.time is now report.stats.seconds. The report/reportTask.warnings: List[str] have been added to provide non-error information like reached limits:

Changes in the Schema class:

There are a few changes in the Error data structure:

Note that all the metadata entities that have multiple implementations in v5 are based on a unified type model. It means that they use the type property to provide type information:

It’s been many years that Frictionless were mixing declarative metadata and object model for historical reasons. Since the first implementation of datapackage library we used different approaches to sync internal state to provide both interfaces descriptor and object model. In Frictionless Framework v4 this technique had been taken to a really sophisticated level with special observables dictionary classes. It was quite smart and nice-to-use for quick prototyping in REPL but it was really hard to maintain and error-prone.

In Framework v5 we finally decided to follow the “right way” for handling this problem and split descriptors and object model completely.

In the Frictionless World we deal with a lot of declarative metadata descriptors such as packages, schemas, pipelines, etc. Nothing changes in v5 regarding this. So for example here is a Table Schema:

There are a few important traits of the new model:

it’s not possible to create a metadata instance from an invalid descriptor
it’s almost always guaranteed that a metadata instance is valid
it’s not possible to mix dicts and classes in methods like package.add_resource
it’s not possible to export an invalid descriptor
This separation might make one to add a few additional lines of code, but it gives us much less fragile programs in the end. It’s especially important for software integrators who want to be sure that they write working code. At the same time, for quick prototyping and discovery Frictionless still provides high-level actions like validate function that are more forgiving regarding user input.

One of the most important consequences of “fixing” state management in Frictionless is our new ability to provide static typing for the framework codebase. This work is in progress but we have already added a lot of types and it successfully pass pyright validation. We highly recommend enabling pyright in your IDE to see all the type problems in-advance:

We’re happy to announce that we’re finally ready to drop a JavaScript dependency for the docs generation as we migrated it to Livemark. Moreover, Livemark’s ability to execute scripts inside the documentation and other nifty features like simple Tabs or a reference generator will save us hours and hours for writing better docs. 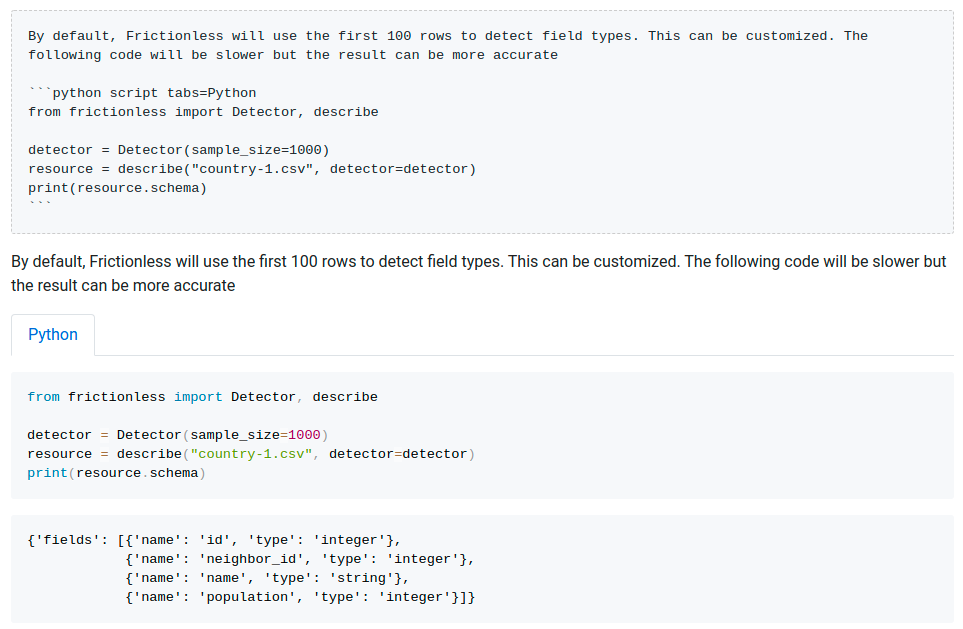 We hope that Livemark docs writing experience will make our contributors happier and allow to grow our community of Frictionless Authors and Users. Let’s chat in our Slack (opens new window) if you have questions or just want to say hi.